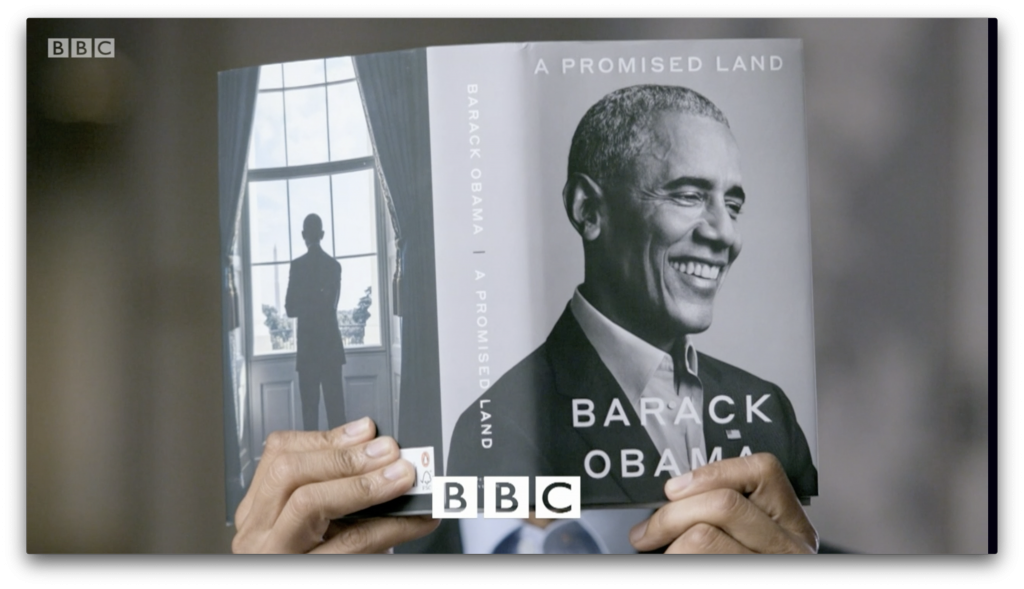 Was very pleased to have been asked to write the soundtrack for two documentaries. One on the youth of Charles de Gaulle directed by my good friend Olivier Sarrazin for French TV. And one for the BBC, an interview with Barak Obama on the occasion of the publishing of his new book ‘The Promised Land’, directed by David Shulman. Both very enjoyable projects. Nice review of ‘Still’ in Prog Magazine.  The album is officially released on June 26th (digitally from all the usual outlets and physically through Burning Shed) but for those of you who can’t wait you can order pre-release copies now from the Shop.

‘Still’ with Colin Bass: OUT!

My new album with Colin Bass (Camel) is finally here! A collection of meditative, ambient songs with Colin on vocals, bass and piano and myself on keyboards, we both share the songwriting credits. The album is officially released on June 26th (digitally from all the usual outlets and physically through Burning Shed) but for those of you who can’t wait you can order pre-release copies now from the Shop.

So what’s the story behind this collaboration? Well, way back in 1977, when I was 14 years old, I attended a week-long Summer music seminar in the Alps resort of Les Arcs. I met many weird and wonderful musicians but especially American composer and multi-instrumentalist Jim Cuomo (amongst other things a pioneer of early 8-bit computer games music) who was there to lead the jazz/ rock/pop workshops together with his group The Casual Band. The bass player was Colin Bass, who had just left the Steve Hillage Band and was about to become a permanent member of prog group Camel. A friendship developed with both Cuomo and Bass which went beyond that particular encounter and we have kept in touch ever since.

In 2014 me and Colin started discussing the idea of working together on an album of songs where each of us would contribute an equal number of compositions. With Bass now living in Wales and myself here in London, all the work was done remotely. But despite the distance we developed an immediate symbiotic understanding of what the project should be. The almost complete absence of drums gives the songs a floating sense of space and timelessness. From the pattern-based ‘Summer’ to the freeform ‘The Man Who Never Was’, and from the sparse minimalism of ‘Once Was a Time’ to the epic ‘Heaven’, ‘Still’ evokes a place of quiet emotions and nostalgic reflection. Recently, the song ‘Old Europe’, originally written as an ode to Europe, has taken on new and topical meanings.

‘Still’ is dedicated to the memory of Jim Cuomo who sadly passed away in 2018. 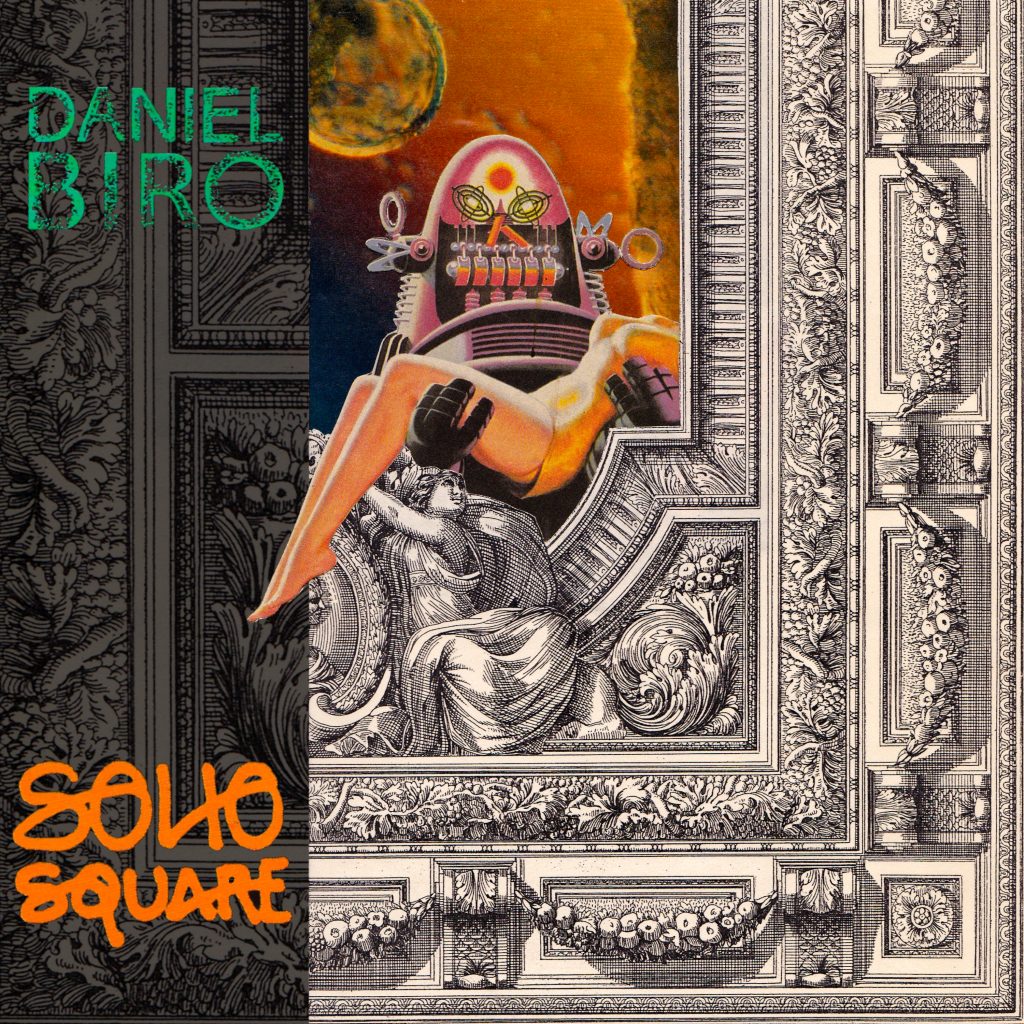 I am currently remastering all my early albums. First up is ‘Soho Square’ from 1993 (wow! that long ago…) which is out now. Followed shortly by ‘The Comparative Anatomy of Angels’, ‘Elegant Enigmas’, ‘The Long Journey Home’, ‘A Still, Thin Sound’ etc. I’ve added some Bonus Tracks on each album that more or less relate to the period of the album. For the moment these will be digital releases only but who knows… maybe a CD boxed set will emerge at some point, finances permitting. All will be available from the usual digital outlets. 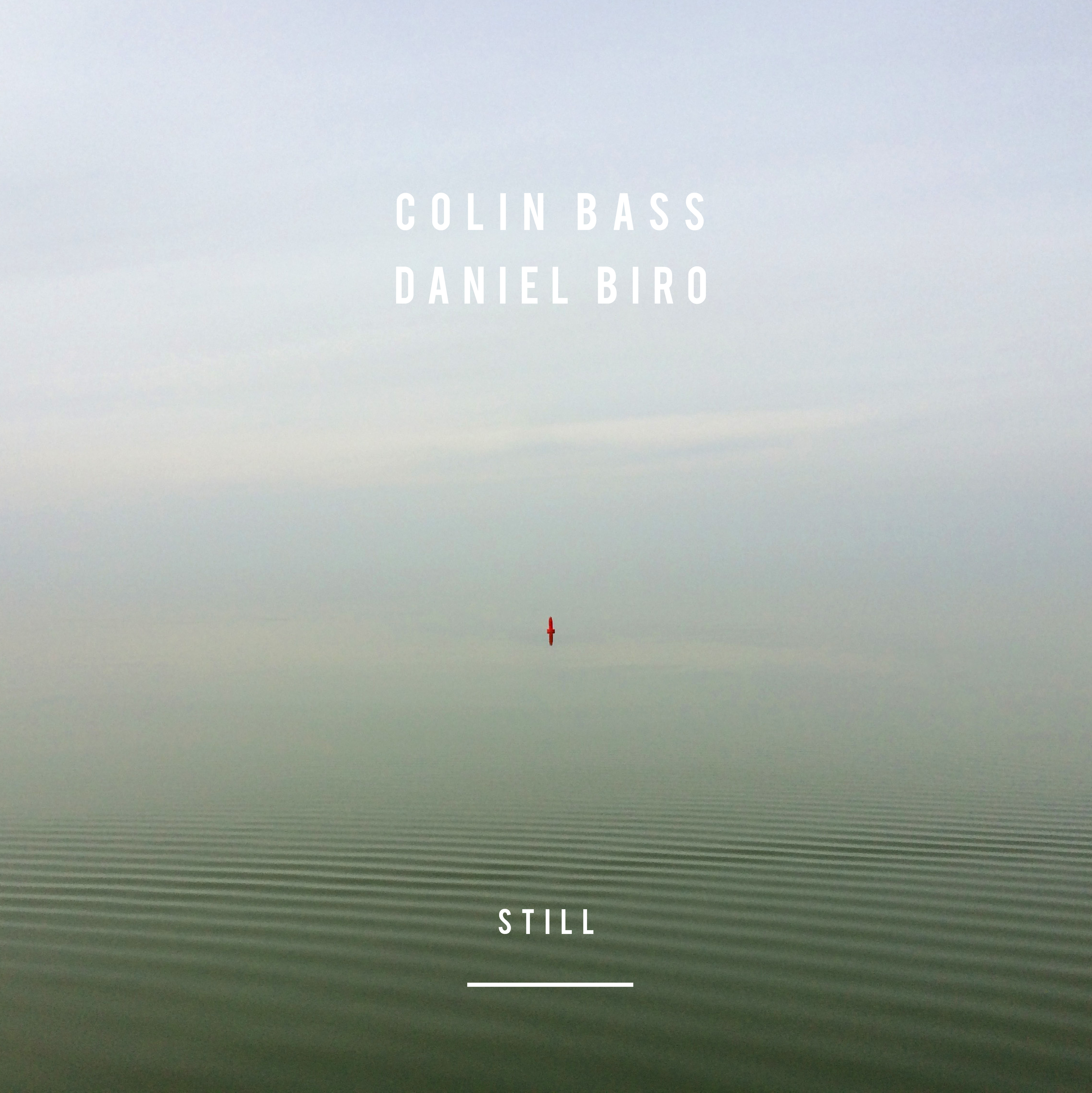 Am very excited about progress on my new album of songs in collaboration with my old friend Colin Bass (Camel) on vocals and bass. The album called ‘Still’ is a collection of his and my compositions, mostly ambient, slow-moving (no drums…) songs, hence the title. We are currently crowdfunding for the album production. So you can support us by pre-ordering a signed copy or even have your name in the booklet or another one of the fantastic perks on offer! To find out more go to: https://igg.me/at/bassbirostill

See below for promo video 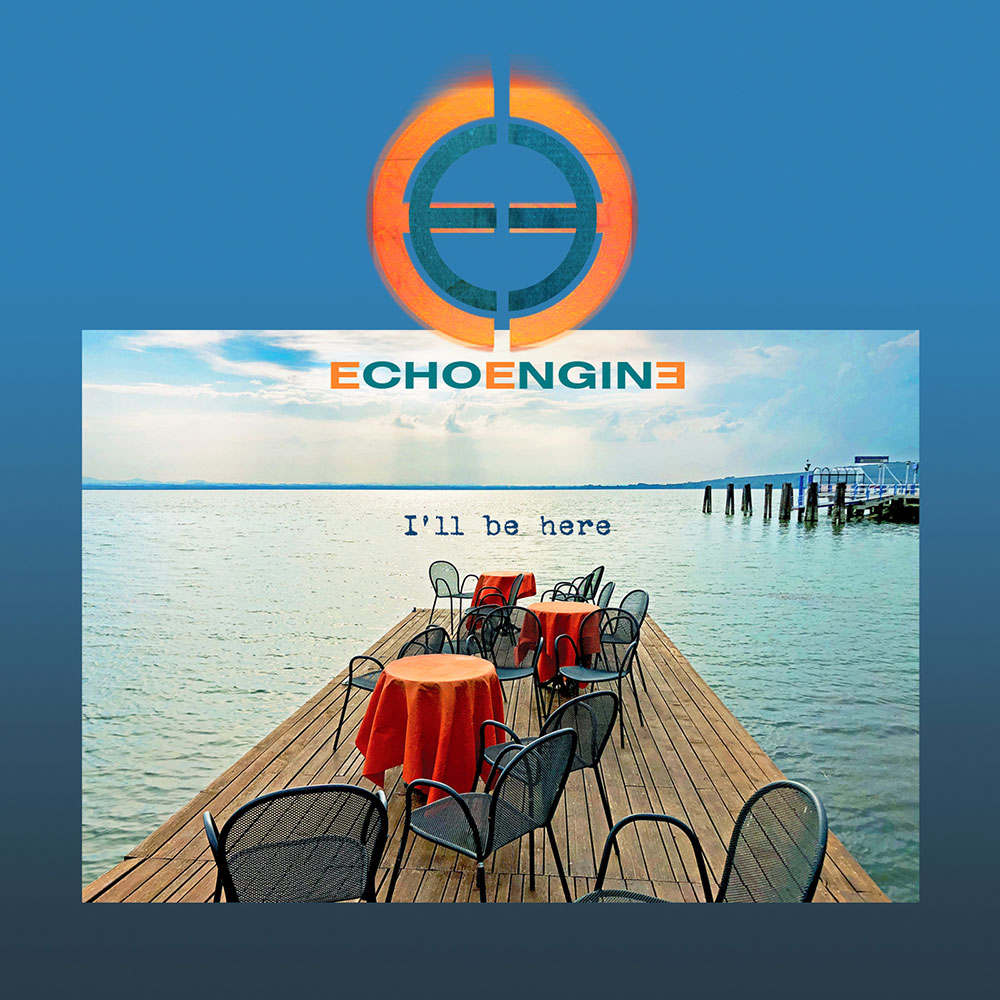 Following Echo Engine’s debut album ‘Windjammer’ a few years ago with special guest Theo travis, the band returns with a new album ‘I’ll be Here’. Another intricate sound collage of improv/experimental/ambient/jazz/grooves edited from a series of live ‘happenings’. Apart from the core participants of Adrian Newton (electronics, beats) and Rob Palmer (guitar) and myself, the recordings feature sax player Jon Lloyd, Pascal Consoli on drums and Joe Limburn on bass.

The CD is available now from my Shop or on Bandcamp. 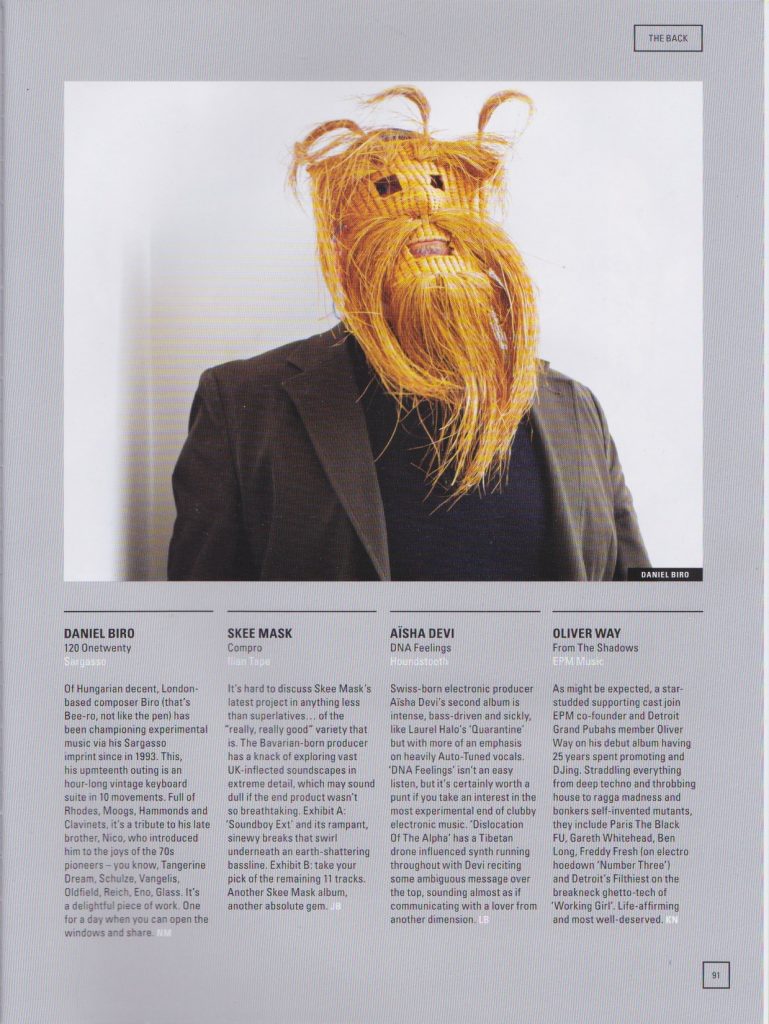 Very happy about the great little review I got in the revered Electronic Sound Magazine. Glad they used my ‘Wicker Man’ photo. Not many would have dared… 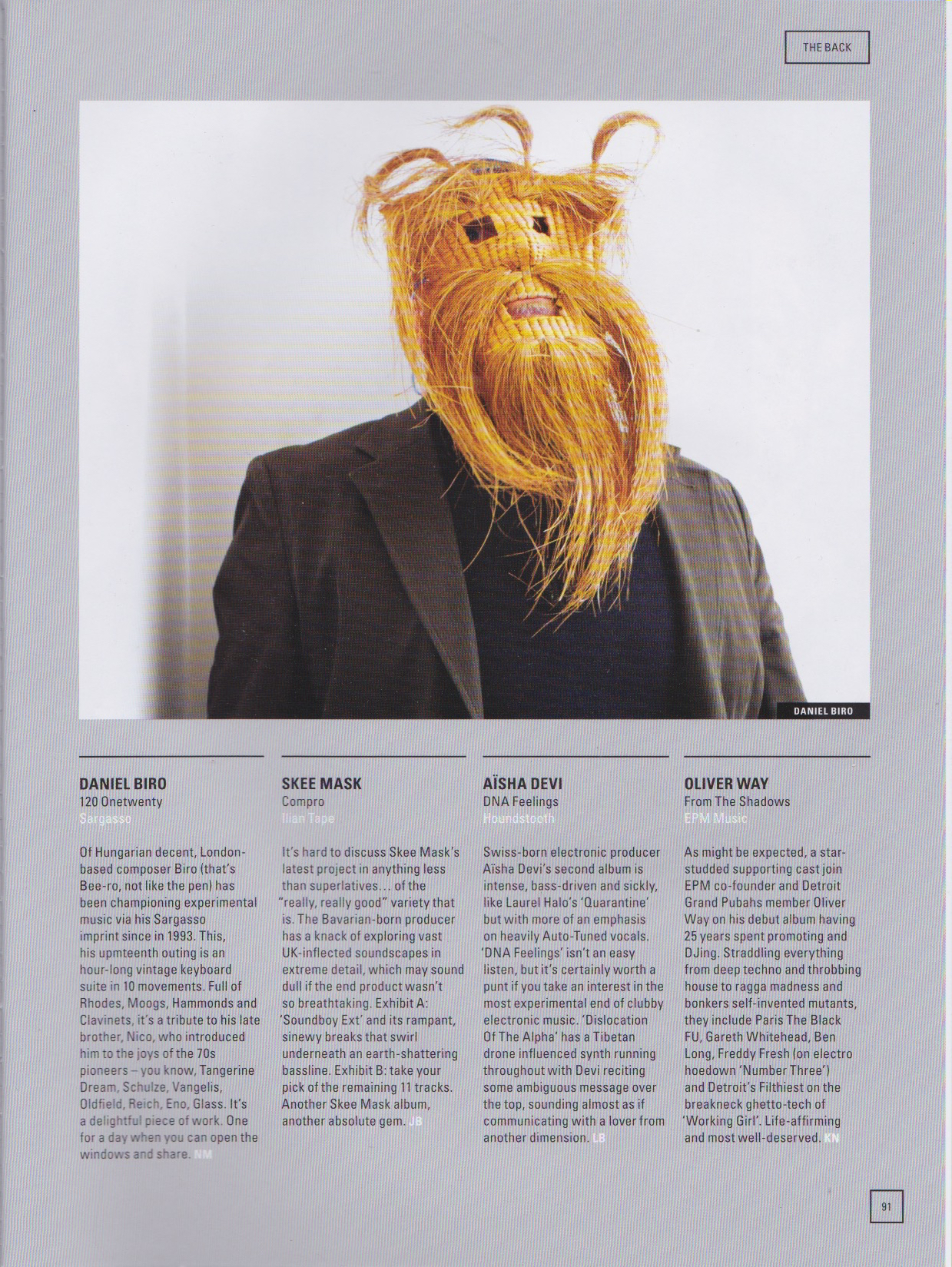 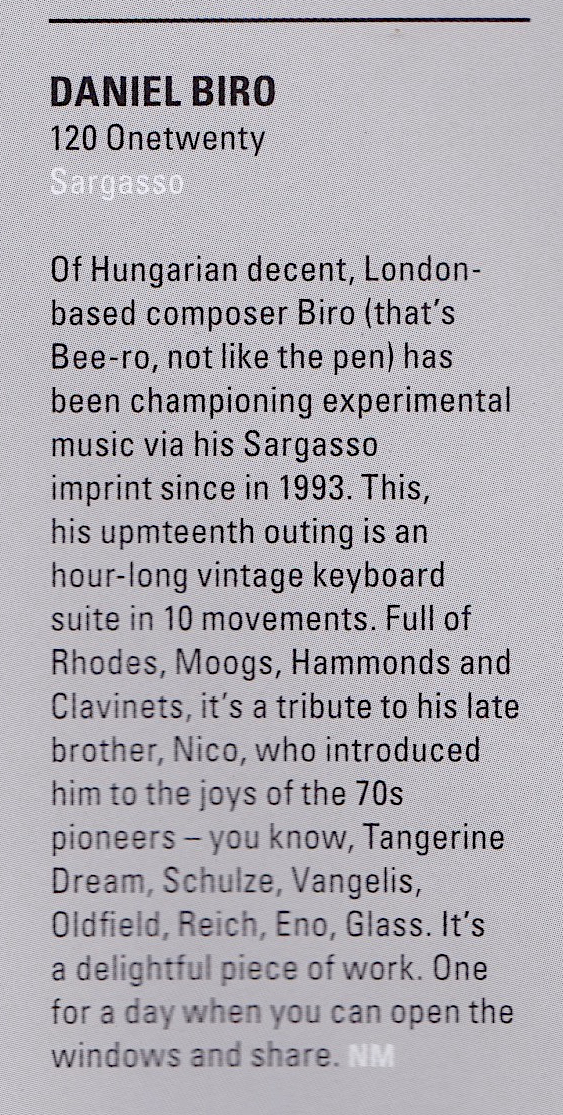 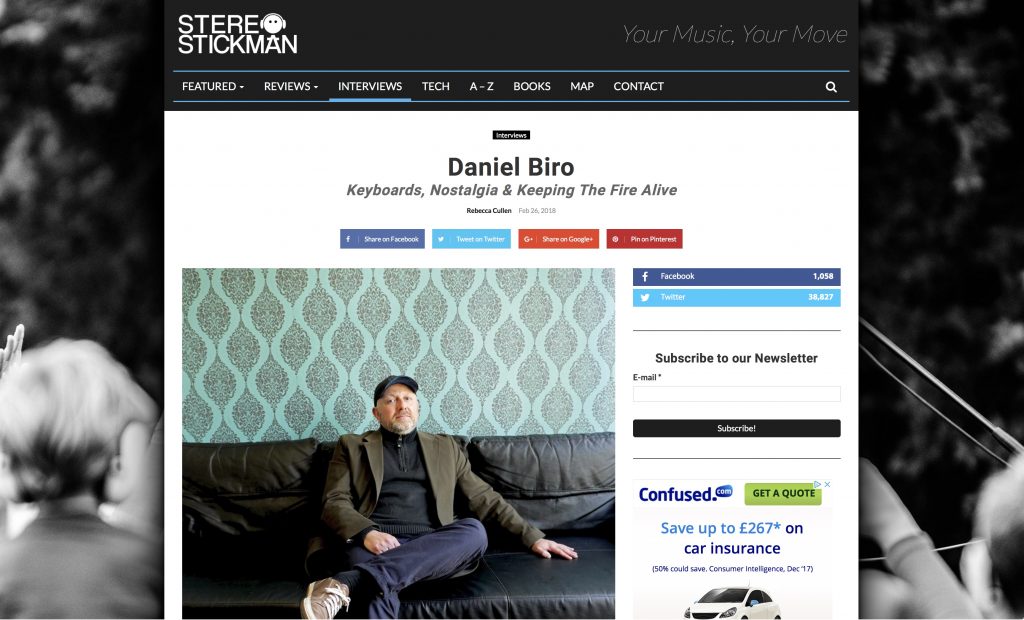 Been getting some amazing review for my new album…

So nice when people like your music because they ‘get it’.

Also got a fab interview on Stereo Stickman site. You can read it here.

Don’t mean to blow my own trumpet, but here are some of the best quotes:

“The elegance, mystery, joy, and melancholy, heard in these pieces, combine into one monumental, multifaceted project that may just be one of the twenty-first century’s greatest artistic commitment’s to the sound and use of vintage keyboards.” www.tunedloud.com

“How this whole album seems to just continually get better and more imaginative is quite breathtaking. For real – what Daniel is able to do and how flawlessly he does it, is nothing short of stunning at all times; for ambient/instrumental music, I haven’t felt bored once or like he’s overplayed his ambitions here – he sounds incredibly focused and I really feel like he’s created a record that has you on pins & needles for the tremendous depths it explores in its own subtle way. What an exceptional adventure! Daniel Biro has got a highly imaginative mind and a tremendous ear for sound…at his maximum he gets completely wild, but even at his mildest & most gentle, still manages to always create something compelling to the ears and brilliantly captivating to the mind’s eye.” sleepingbagstudios.ca

“with inspiration from Tangerine Dream, Klaus Schulze and other iconic German artists mixing effortlessly with Biro’s own style to form a tour de force of atmospheric brilliance. Textured, refined, and brilliantly layered, ‘120 OneTwenty’ manages to escape the usual trappings of most instrumental albums, carving its own path of awe-inspiring atmospheres and progressive, jazz-rock fusions. It’s a unique vision brought into existence by a very talented composer” broken8records.com

“All at once complex and calming, detailed and smoothly ambient. If ever there are artistic projects that seem completely free from industry influence and entirely connected to the mind and passion of their maker, this is undoubtedly one of them.” stereostickman.com

“an epic aural journey, Daniel Biro sculpts the sound of a long-lost classic, with tremendously powerful keyboard work. Attention to detail means these songs immerse the listener into a dazzling world. Mystical and majestic www.beachsloth.com

You can get your own copy from my website here. And why not treat yourself to the signed/numbered limited boxed edition? I’ll even include a personalised note. All you have to do is email me through the Contact page and let me know your Order No and the name you want me to dedicate the message to.

Thanks for your support 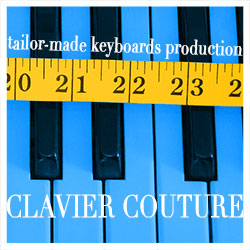 Do you want Daniel Biro to play on your album?

Daniel has just launched Clavier Couture, a bespoke online keyboard production service. Clavier Couture is just that: tailor-made keyboard parts for your track/song/album that are unique to you and played live by Daniel Biro in his studio and delivered to your inbox. Let Daniel be your keyboard player on your next recording!
For more info go to: www.claviercouture.com. 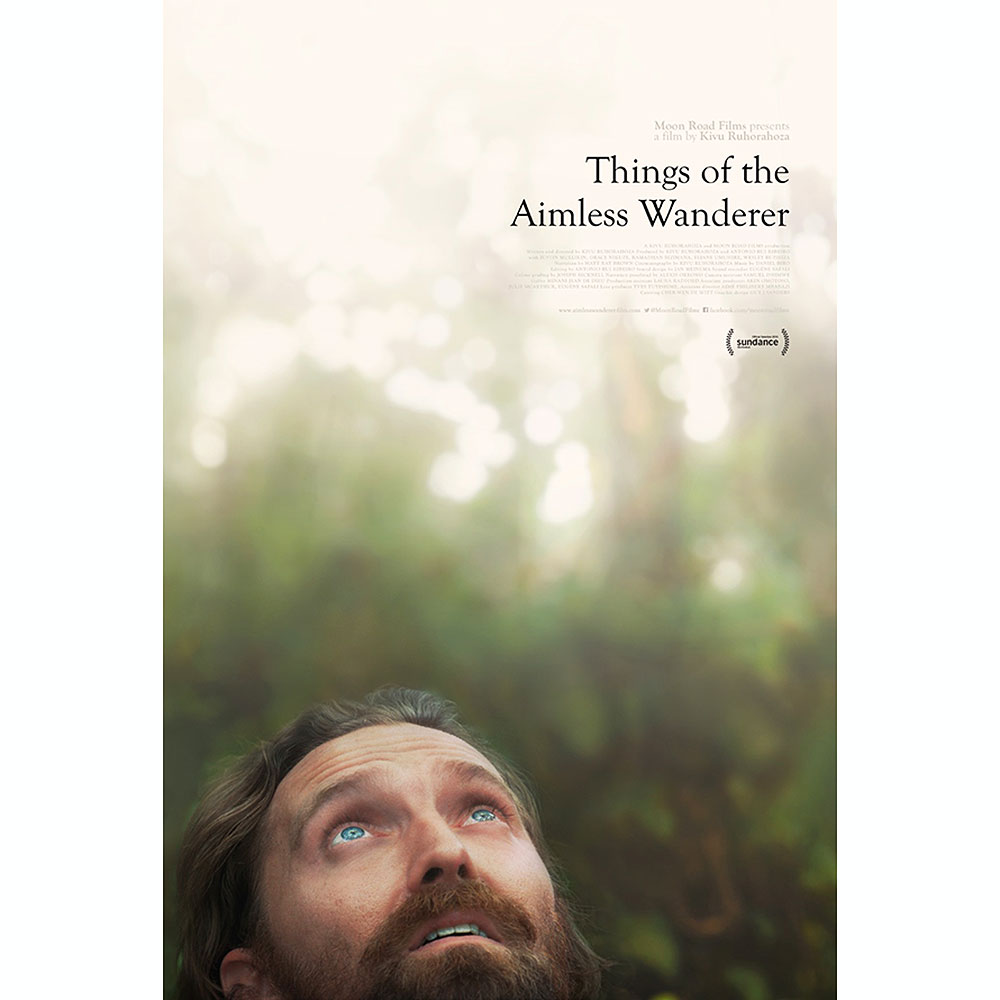 OST for ‘Things of the Aimless Wanderer’ out now.

The Original Soundtrack to Kivu Ruhorahoza’s award-winning film ‘Things of the Aimless Wanderer’ has now been released as a download only album (CD coming soon). This 1-hour long ambient/sound-collage/synth piece is available from our Shop

Here are links to a couple of great reviews of ‘Things Of The Aimless Wonderer’ film by Kivu Ruhorahoza scored by Daniel.

“… Daniel Biro’s score bellows across the treetops as we become entranced, losing ourselves deeper and deeper into the forest…” Read more.

“In a Sundance Film Festival marked by outstanding scores, in particular Sam Shalabi’s  The Amina Profile, Biro’s wide, wild and wonderful music is like Brian Eno and The Orb (my Occidental ears!) got together with African Rwandan artists, smoked some cannabis and then got down to creative business.” Read more.

The new film by Rwandan director Kivu Ruhorahoza ‘Things Of The Aimless Wanderer’ for which Daniel wrote the music and sound, was been selected for the ‘New Frontier’ section of the Sundance Film Festival in 2015. Daniel flew to Utah for the event.

See the film’s page on the Sundance website here.

Read Daniel’s comments about making the soundtrack for the movie:

“It’s not often that a film director approaches a composer with a new film saying “There’s very little dialogue so we need lots of music and I want it to be as experimental as possible! And yet this is the kind of project I was offered with “˜Things Of The Aimless Wanderer”.

Based on some of my previous work and as founder of experimental music label Sargasso (www.sargasso.com), director Kivu Ruhorahoza and producer/editor Antonio Ribeiro thought I’d be well suited to provide for the considerable sonic needs of the film. They also gave me some intriguing references to watch as examples of the direction they wanted the film to go. I was pleased to see these references were classic art/auteur films like Chris Marker’s ‘Sans Soleil’ and ‘La Jetée, Kurosawa’s ‘Rashomon’ and other European avant-garde directors like Alain Resnais.

Kivu wanted the music not just to accompany the visuals but also to go against them and pervert the meaning of the images. As the whole film is about three different perspectives on the same event: the disappearance of a young girl., We decided early on that each of the three protagonists would inhabit a particular sonic universe that reflected their inner-states.  I therefore started looking at the background of each character and define what their ‘cultural imprint’ would be. The last thing Kivu wanted was ‘African music’. His artistic vision is much broader, surreal and unorthodox. It was exciting to be encouraged to try out improbable juxtapositions of sound and image to warp any expectations.

We went from the primeval/organic wails of a ram’s horn to totally electronic synth warbling, via the classic ‘Western’ acoustic piano. One of the sounds I ended up using are church bells I had recorded years ago in one of the oldest bell foundries in Italy, based in this tiny village near Rome. They kindly allowed me to visit their storerooms and capture the extraordinary richness of the hundreds of bells of all sizes that were hanging from the ceiling. There I was, hitting, scraping, swiping away, under the bemused gaze of the local workers. I knew these sounds would come in handy one day…”